The first chassis will be built from a brand new ‘909’ Motorsport shell. This has been unused and carefully stored since the 1980s. Each car will come with HTP papers, fuel cell and roll cage certificates and will be ready to race.

Rouse set up Andy Rouse Engineering (ARE) in 1981 with his team winning the title in 1983, 1984 and 1985, each time with a different car. He then worked closely with Ford to develop the Sierra Cosworth into a successful Touring car. Rouse retired from professional motorsport in 1995 and this is the first project he has been involved with since the SCV8 concept in 2003.

CNC Motorsport AWS, founded by Alan Strachan, is a renowned restorer and builder of historic Touring Cars from the 1970s to 2000s. In the past two years it has built period specification Group A Rover SD1, Ford Sierra RS500 and Merkur XR4TI cars. Alongside that, it has produced a vast array of machined parts such as brake calipers and wheels that it designs and produces for other restorers and race teams at its Gloucestershire workshop.

Strachan worked for Rouse in period, building and running cars in the BTCC between 1989 and 1992 – height of the RS500’s dominance in Touring Cars – and from 1993 to 1996. He and the CNC Motorsport AWS team have access to drawings and data to produce the Rouse-specific parts, such as front suspension uprights, rear arms, fuel tank enclosure, heated ‘screen, side-exit exhaust and the Rouse-designed steel roll cage to create true ARE cars.

Demand for competitive Group A machines is rising, enabling access to some of the best motorsport events around the globe for correct cars. RS500s are great fun to drive, relatively easy to maintain and considerably more affordable to run than Super Touring cars. RS500s are also a great draw for the fans that fondly remember these fire-breathing monsters. The cars will be all signed off by Andy, just as we did in period, with the provenance that can only come from the man who engineered and drove the cars to such success. Alan Strachan, founder of CNC Motorsport AWS.

“The RS500 was lots of fun and of all the cars I raced, the Kaliber RS500 is the one I wish I still had today” says Andy Rouse. “When Alan told me he had acquired a brand new bodyshell, we came up with the idea to build correct continuation cars just as we did in our Binley workshop. Having seen Alan develop his own engineering business, he was the only person I trusted to build cars that would carry the ARE build plate.”

The Sierra Cosworth RS500 was announced in July 1987. Just 500 were produced with a number of key upgrades to boost its performance in Touring Car racing. These included a larger Garrett turbocharger, bigger intercooler, a second fuel rail, different injectors and cooling system.

Externally it featured an additional rear spoiler, front splitter and the fog lamps were removed to improve brake cooling. Just 500 road cars were produced with race cars built from 909 Motorsport shells, just as the first Rouse continuation car will be. Having scored 40 BTCC wins it was voted the best BTCC car ever by Autosport in 2020. 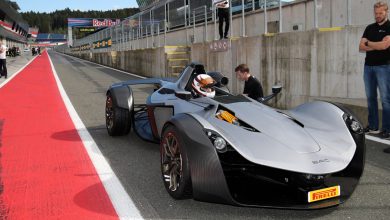